Passion for Quality
since 1998

We are Birgit & Georg Maske. We will happily provide you with individual advice on the selection of your new frame in one of our optician shops in either Tiergarten or Charlottenburg.

We put a lot of emphasis on an extensive and exact eye test for which we like to take our time. The eye test is the foundation for a stress-free vision and therefore physical well-being. The test is only done by licensed opticians with substantiated expert knowledge. We constantly inform ourselves on any new teachings and implement these in our daily work.

If specific symptoms are present, we extend the usual eye test to also measure the impairment of binocular vision with an MCH test.

From the Danish royal house to software entrepreneurs to movie icons: spectacle wearers love the lightness of LINDBERG. This was our motivation to open the first LINDBERG Premium Partner Store in all of Europe in Berlin. On August 30th we celebrated exactly this with Henrik Lindberg and his team from Aarhus. You can find a few of the impressions of that night → HERE.

The façade of our Tiergarten shop is covered in bright summer colors of geometrical graffiti by Nuremberg-based graffiti artist Julian Vogel. Even on the lively Postdamer Straße, which has developed into a center of art and creativity, this artwork stands out. After all, since March 2017 the semi transparent lettering on the windows reveals that there is something to discover here: our new shop! 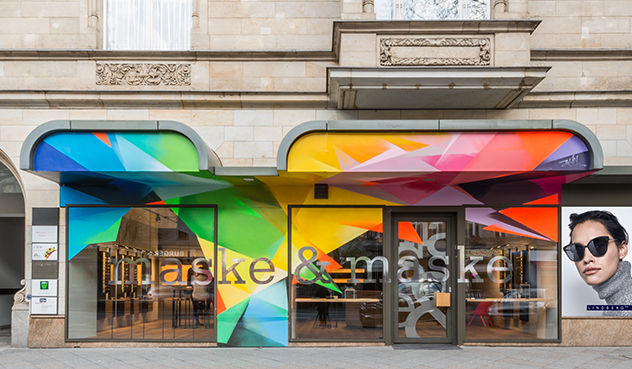 There’s a new
Kid in Town

The frames from LINDBERG have always been equally popular with us and our customers. The reason is right on the nose, because LINDBERG is one of the world’s leading eyewear brands with its minimalist, lightweight eyewear, and bestowed with 84 international design awards. Or as Georg would word it: “LINDBERG doesn’t only convince me personally. Other suppliers can’t live up to LINDBERG‘s innovative and unbelievably light frames, which have set a high standard of longevity and high quality.” We came to the decision to open a LINDBERG-Store five years ago: Many personal conversations, the passion for the label and the right arguments finally convinced the brand LINDBERG in favor of a store in Berlin. Finally, on August 30th we celebrated the offcial opening – you can see a few impressions of the evening → HERE.

From a Vision
to Design Tradition

Poul-Jørn Lindberg and his wife Hanne began their optician business in 1969. Initially, Lindberg sold standard models, however noticed quickly that these did not live up to his expectations. So Lindberg began creating his own designs, which were meant to be significantly lighter than anything the market had to offer at that time. In 1983 he pursued his visions of unobtrusive elegance and progressive design with the architect Hans Dissing. The result of this was the LINDBERG »Air«, the worldwide first frame made from titanium. And it set new standards – and continues to do so today.

While LINDBERG glasses convince with their stylisch understatement they also stand for the highest Danish handcraft. Clear lines form the frame, which was designed completely without screws, riveting or soldering long before other suppliers tried this technique. The frames consist of fine titanium wire that is bent to form different designs. This explains the lightness but also benefits the resilience of the glasses. And this has convinced famous wearers from Meryl Streep and Joan Smalls to Günther Jauch and Brad Pitt.

how to find us